Salad Shirazi is an Iranian recipe made from chopped cucumbers, tomatoes, a zesty dressing, and dried herbs. It's a classic Persian side salad that's juicy and refreshing.

This salad is originally from a city in Southwestern Iran, called Shiraz. It's known as the city of gardens, poets, flowers, and literature in Iran.

It pairs incredibly well with all sorts of dishes like roast chicken, kabobs, rice dishes, and pasta.

I'll show you how to make the best salad Shirazi in just a few simple steps.

Why You'll Love This Recipe

If you like Mediterranean or Middle Eastern recipes you'll be very familiar with the flavors in this salad, it's very similar to a standard chopped Middle Eastern salad.

This salad is super simple to make but it packs in lots of flavors. The special addition to this recipe that sets it apart from other regional chopped salads is the dried mint.

Many of the region's salads have fresh herbs in them, but the authentic version of this recipe calls for dried mint that's rubbed between your fingers (to release the flavor). This gives the recipe a much deeper flavor of mint because it's more concentrated.

I've also included a small amount of ground sumac in this recipe, which is an authentic but not always included spice. If you don't have it, that's okay, but if you do have access to it I think it adds a lovely tanginess.

Tomatoes - You'll need 4 tomatoes for this recipe. I used Roma tomatoes (which I would recommend) because they are easy to dice. Use heirloom if you have them in season.

Cucumbers - You'll need 4 Persian cucumbers or 1 large English cucumber for this recipe. They're the easiest to use because you don't have to peel or deseed them. If you are using a regular hothouse cucumber, you'll need to peel it and if the seeds are large, cut them off.

Onion - You'll need 1/2 a medium white onion. I like white the best in this recipe, but I know some people prefer red onions. If you decide to use red onion, be sure to soak it before adding it to the salad to remove bitterness.

Lime Juice - You'll need 1/3 cup of freshly squeezed lime juice. Traditionally verjuice (a sour pressed grape juice) is used in this recipe but it can be hard to source.

What is in Shirazi salad?

Shirazi salad is made from tomatoes, cucumbers, onions, dried mint and other spices, olive oil, and verjuice (sour grape juice) or lime juice.

How to pronounce Shirazi salad?

How to make a good Shirazi salad?

There are two key tips to making a great Shirazi salad. First, chop the tomatoes and cucumbers as small and evenly as possible ensuring you get all flavors in each bite. And second, don't skip adding the acid (verjuice or lime) or be tempted to reduce the amount - it's what brightens the overall flavor of the dish.

What to Serve Alongside Salad Shirazi

This salad is almost always served as a side salad, although you could use it to top fish or meat if you like. Here's what I like to serve alongside it.

Tips for Making this Recipe

Links on some posts are affiliate links and as an Amazon Associate I earn from qualifying purchases.

Recommended Tools - You don't have to have this, but I like chopping my tomatoes with a tomato knife. I think it allows me to get a more even and smaller dice.

Storing Tips - This recipe will keep in the refrigerator for up to 4 days, but it's best the day you make it. The tomatoes and cucumber will dry out the longer they sit, so if you are making this in advance, toss it with a little more olive oil before serving.

If you try this recipe, let us know! Connect with us on Instagram and share your photos or leave us a rating. 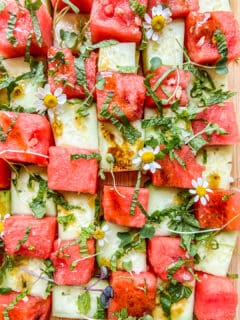 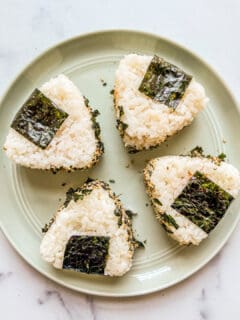